Severe lack of posting… but much progress.   I’ve been in and out of Palestine several times now, but the team has persevered and gotten SPIDER together.  We’re doing “full up” tests now, and getting all the on-board software that runs the thing into shape.

The payload sure looks impressive… here it is, looking out the highbay door at night while mapping telescope response on a “hot source” in the parking lot.  We have five of the six telescopes in place – the dark circles are baffles that keep stray light from getting into the telescopes.  The whole payload is, in this picture, hanging from a crane, scanning back and forth driven by its onboard systems. 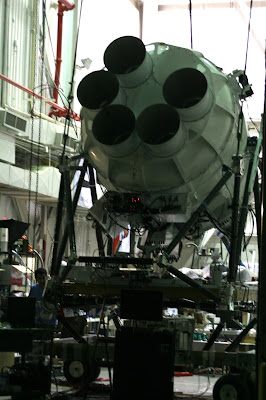 Here’s the source – it’s just a small hot “oven” with a circular hole in it, broadcasting thermal radiation (its “glow”) toward Spider.  You can barely see the source in this picture, but you can see how it’s set up high on a lift bucket.  The big black sheet is for some “fake stars” used during the daytime scanning, so the star camera has something to look at.  At night, like in this photo, the gondola pointing is controlled using the real stars in the background! 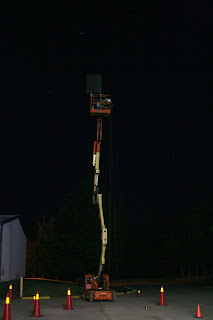 When we’re doing these tests, the team is inside the highbay working to control the instrument;  here’s Jamil, a UToronto grad student, controlling the gondola motion from his laptop. 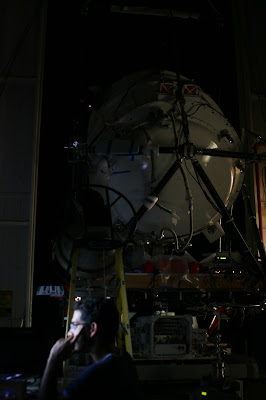 The balloon base is a beautiful place at night;  here’s the big water tower, in a very overexposed image, with its red light (so airplanes from the nearby airport won’t hit it) on top. 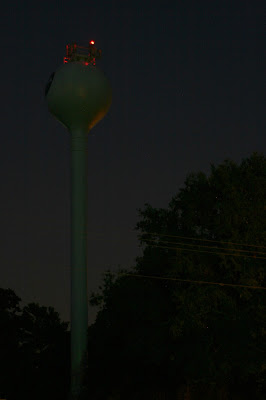 And, very late at night, we undoubtably get a little slap happy at times.  Here’s a “creative” shot of Sasha and Sean, getting ready to leave for the night.   I had been playing with long exposures outside to get the water tower picture, and took a long shot while rotating the camera to get this. 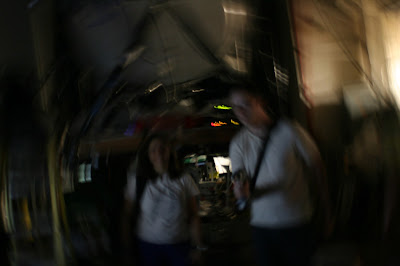