For the past… maybe 7, 8? years or so, we’ve been working to build a balloon-borne experiment to measure the polarization signature of Inflation (if that signature is there) in the Cosmic Microwave Background radiation – the remant glow from the big bang.   We call it “Spider” because that made some sense in the early days given what it was supposed to look like and do… the design has since changed but the name stuck.

Finally, the instrument is coming together. We’ve just begun our “integration campaign” in Palestine, Texas, at NASA’s Columbia Scientific Balloon Facility. We’ll spend the next couple of months getting the instrument together and checked out with NASA’s flight equipment, after which we’ll box it up and send it off to Antarctica for the flight in December. (More on that later).

The first people on our team arrived a week ago, and I just got here today – I had to finish up a little hectic last-minute work on some hardware we need here before I could come down. It’s getting late on the first night here, but I thought I’d post a couple pictures. Here’s the highbay we’re working in: 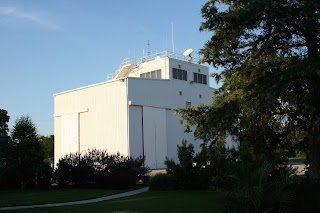 The big doors are so tall because the payloads we work on have to be picked up by a crane to be pulled out of the building once they’re completely assembled. Tomorrow I’ll post pictures of the highbay from the inside. Here’s a sunset shot looking through the trees to the balloon launch pad they have here – quite a beautiful site in West Texas… sunset is always welcome when the day was in the 90’s. 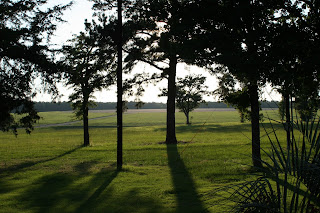 Finally, for the aficionados, here’s a picture of five of our receivers (aka telescopes) getting put together… still lots to do, but things are coming together fast! 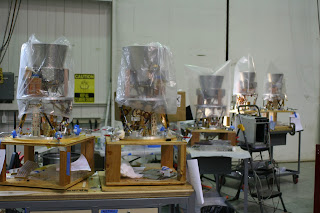 Finally, here’s a terribly-focused picture of some of the crew in the kitchen/eating area in the highbay enjoying home-cooked pizza, thanks to Jon Gudmundsson, one of the Princeton grad students, who slaved over a hot oven for our benefit. Thanks Jon!  (That’s him in the back, in the brown shirt) 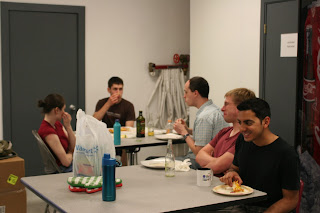