The wind came today, 20 knots of it, and picked up ice crystals from the “ground” and flew them up into the air. The visibility went down so it is hard to see SPT from the station and vice versa. Here’s a picture from the Dark Sector Lab (connected to SPT) looking back toward the station, which is nearly invisible between the snow mound on the right and MAPO (another Dark Sector
building) on the left. 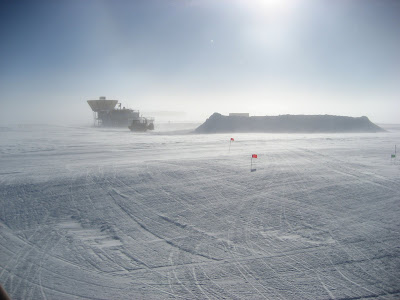 Those ice crystals make for some interesting atmospheric phenomena. This is a picture of me with the sun behind my back, and two rainbow “sun dogs” on either side of me. You can also see a faint circle of bright 23deg from the sun that goes all the way around. 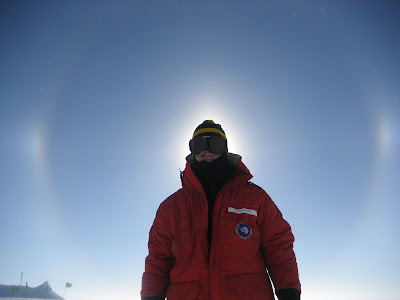 Not seen here is an inverted rainbow above the sun, about 60deg or so from the horizon, and a bright spot on the horizon just below the sun.

It was blowing pretty hard when we walked out to the telescope after lunch – but somone nice picked us up on a snowmobile – I rode behind on a sled. Normally riding like this is pretty chilly compared with walking, but given the good winds, it didn’t make much difference and it sure is faster! 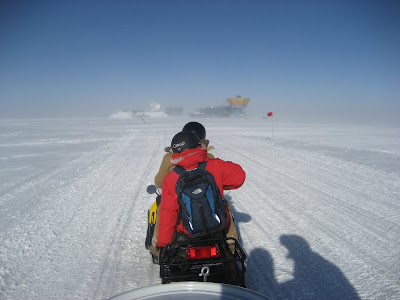 I’m posting this from the telescope – just about to head back for dinner. Unfortunately, I’ll probably have to walk. 🙂