We live in a very nice new station that in many ways is like a cruise ship. Here’s an outside view of the station. 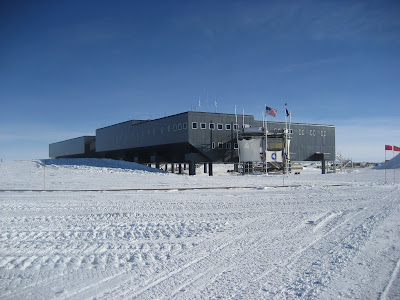 It’s up on stilts to reduce the amount of drifting each year. Drifting is a big deal over the winter, when they don’t run big machines outside to dig out the snow – it’s just too cold. Here’s what they do in the summer to take care of the drifting that happened over the winter out in the “Dark Sector”, where all the telescopes are. 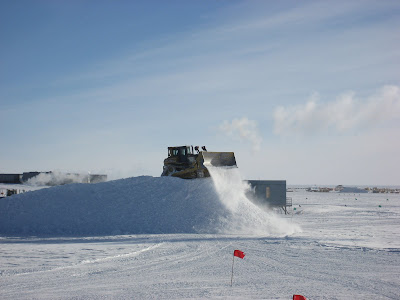 All the buildings in the Dark Sector are also on stilts, but over the 10 or more years they’ve been there the drifting has brought the snow level of the whole area up so that the stilts are no longer visible.

Our telescope is connected to the “Dark Sector Laboratory” (or DSL), which is about a 1km walk
from the main station. We walk out there and back about 3 times a day – out in the morning, back for lunch, out again for the afternoon, back for dinner, and often out again (and back) for an evening session of work. Here’s a picture of the road to the DSL… with some lucky folks with a snowmobile in the foreground, and a tractor (which you can find by following its smoke/steam plume back to it, in the middle right of the photo) on its way out there to push snow. SPT is the big telescope out there. 🙂 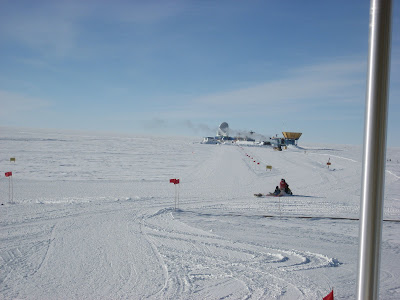 The walk crosses just beyond the end of the runway, so when a plane is coming in we aren’t allowed to cross over to the Dark Sector. Here’s a plane sitting in the “pit”, off-loading fuel for the stations use. 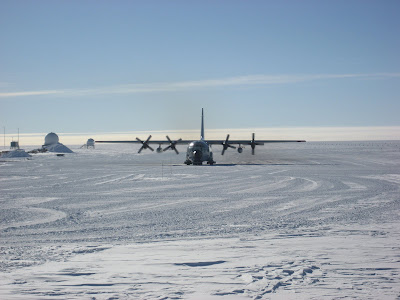 The station is heated, and all its electricity produced, using fuel brought in on C130’s and – in the last couple years – via a land traverse “train” of tractors pulling fuel bladders on plastic sleds. There’s one headed our way now… I’m not sure when it will arrive, but that would be a neat thing to see!