Sunday is a day of rest – or at least no flights – here on the ice. We spent much of the day working (after all, we have our computers and internet access), but we learned of an opportunity too good to pass up, and so went on a little adventure.

The recreation folks in town installed an “Observation Tube” in the sea ice just outside town, and today it was open for all visitors. So, we took the short walk down the dirt road to the ice edge and then out onto the ice. By the way, the view wasn’t bad at all. 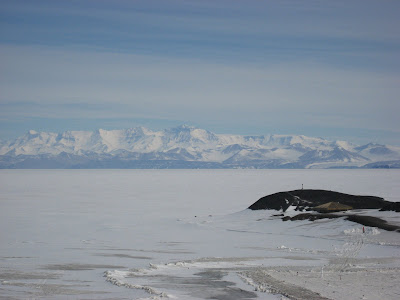 That’s hut point in the foreground, and the tan/brown building in front of it is Robert Scott’s hut from the early 1900’s. The mountains in the background are the Royal Society range, topping out at about 13,200 feet above sea level. Gorgeous.

After a short walk to a pair of small huts, we found the “Obs tube”, a metal pipe just shoulder width in diameter with a ladder built into it, going down about 20 feet or so into the ice and water below it.

One at a time, we climbed down into it, 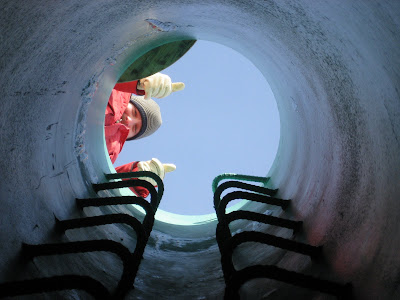 to the bottom where windows lets us look out into a dark but greenish world, lit by the sun filtering through the many feet of ice above. The light was dim, so my photos can’t do it justice… there were a lot of small fish and other creatures floating nearby, which you could see clearly but which come out slow because they moved during the exposure. Here is a picture of something stationary, though… an ice crystal growing on the outside of the viewing port. 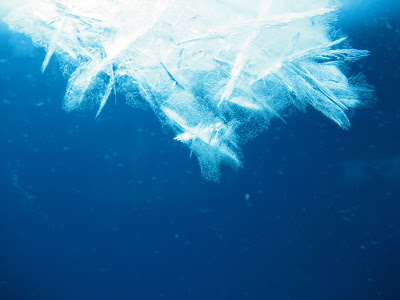 I could have spent hours down there in the tube – it was a beautiful, peaceful place to be. Unfortunately I had to come back up, as others were waiting to come down…

I also heard “pings” from seals down there — I’m not sure what they’re doing, but it almost sounded like they were using sonar like a bat. Just before I went down, in fact, a seal broke through the ice nearby and started trying to get up on the ice. He disappeared for a while, then when I was down in the tube he came up to take a nap. Here he is: 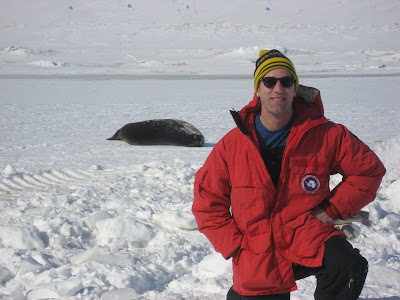