Most days here have been fairly blue-sky, or at most partly cloudy. We ran into a stretch of “whiter” weather, with higher winds and lower visibility. The funny thing is, this kind of weather tends to also come with warmer temperatures! So it may be a little warmer in the photos below, but with the higher wind it actually feels colder. 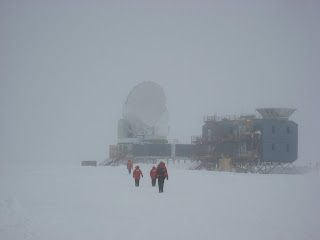 Walking to the telescope on a slightly warmer but much windier and “whiter” day. The South Pole only gets a few inches of real snowfall a year; the rest of what appears to be accumulation is really just blowing snow, which causes huge drifts near the buildings.

We finished a big job a couple days ago: replacing all 100 batteries in the enormous UPS (Uninterruptible Power Supply) that protects out telescope and camera electronics from short power outages or glitches. Because we use so much electricity (between 50 and 100kW), we need a lot of batteries to run the system when the power goes off, even briefly.

To do this, we have 100 12V batteries that are about two or three times the size of a car battery. They each weigh 57lbs. Five of us spent a day and a half disconnecting and pulling out all 100 of the old, bad batteries, and then installing and reconnecting all 100 of the good, new batteries. What a job!

Thankfully, it worked; when we were done the battery life was much longer, and our system can now stand short power outages. 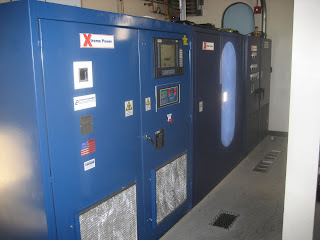 Our battery-powered UPS. The batteries fill the middle cabinet, which has the sunlight from the window shining on it in this photo. 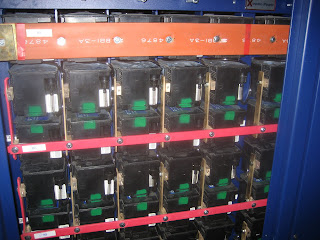 About 20 of the 100 batteries in that cabinet. Each battery is about 3 feet long and weighs 57lbs! In this picture you can also see the vertical (gold colored) and horizontal (red colored) metal bars that make the electrical connections between the batteries. There’s another set of connections similar to this on the other side of the cabinet. That’s a lot of bolts to undo and then put in again!

I was lucky enough to get a room in the station here, rather than out in “summer camp” where about half the people here are quartered. My room is in the main building, which houses about 150 people and also has the galley, our computer room in the “science” area, the store, and all sorts of recreational facilities.

As you’ll see in the photos below, the rooms aren’t huge, but they are warm and big enough to store all your clothes and personal stuff in. The window shades aren’t quite opaque, so when I want to sleep I put a big piece of cardboard over the window to make it darker inside. 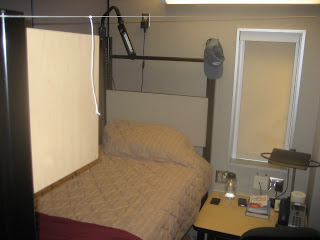 A view of my bed (which is raised up so there is storage space underneath), my desk, and my window. The rope strung across the room is a clothesline; we get to do one load of laundry per week, and drying it in your room both saves electricity and humidifies your room! (It’s very dry here). 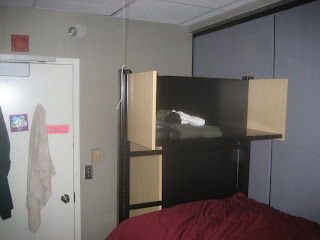 A view from the window looking back at the door, closet, and foot of the bed.

Yesterday I finally got the chance to climb up on the telescope, to see the mirror up close. Ostensibly I went up there to brush some snow off before we start doing observing tests, but really I just wanted to see. 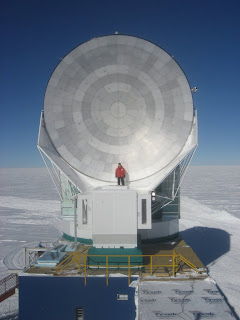 Yep, that’s me in the red coat standing right in front of the 10-meter diameter SPT primary mirror. The mirror is made of many small panels, each about 3feet or so “square”. Each panel was machined from aluminum, using a very precise milling machine (ie, cut with a sharp tool). All the panel surfaces are aligned to within about 40 microns of the desired surface; that’s about the width of a human hair. 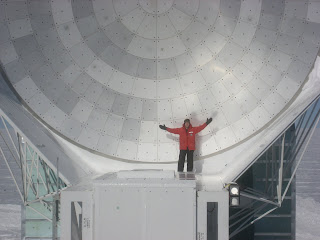 Here’s some video of the route up there, filmed by Abby standing on the roof of the “Dark Sector Lab” building right next to the SPT.
Video: climbing up onto SPT

Here’s another video, which I took while up there:
Video: Up On the Telescope

Yesterday we hoisted the camera and cold optics back up into the telescope; today we finished putting all the electronics back up there and plugging it all back together (which involved plugging in more than 250 connectors and screwing them together so they won’t come loose). So, the camera is back on the telescope, and we’ll be do observing tests!

Video: using the chain hoists to lift the receiver and secondary optics up into the telescope. This is not as much fun as it looks like. 🙂 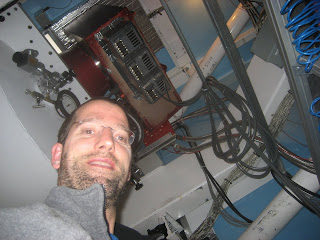 Me, underneath the camera and optics up in the telescope receiver cabin.

The middle of Antarctica is covered by an enormous ice sheet, two miles thick here at the South Pole. That means that all our buildings are sitting on ice… two miles of ice, before you reach earth and rock below us.

The ice doesn’t just sit there. Here at the pole, it’s flowing slowly (about 30 feet/year) toward the south Atlantic Ocean (40 degrees West longitude… the Weddell Sea). The whole South Pole station goes along for the ride, travelling 30 feet per year over the bottom of the earth.

The pole markers that I showed pictures of in my previous post are only accurate when they’re surveyed (using GPS). One month later, the marker is wrong by almost 3 feet! So, they survey every year and place a new pole marker in the ice on New Years Day; the old pole markers stretch out in a long line, slowly getting buried by the snow as the years pass.

It’s about 1000 miles from here to the ocean; at 30 feet per year, it’ll be 175,000 years before those pole markers – along with anything else we leave here in the snow – falls into the ocean.

I’ve been here for about 2 weeks now; it’s funny how easy it is, despite walking back and forth to the telescope several times each day, to forget where you are. Sure, it’s very cold outside, and we have to bundle up for our walk… but we’re here, only yards away from the very axis around which the world turns. Right in the middle of Antarctica, high on the polar plateau, at “the pole”.

Just to prove it (as well as pictures can), here are two photos. The first is me at the “real pole”, the second is a view of our telescope far in the background with the pole marker in the foreground. 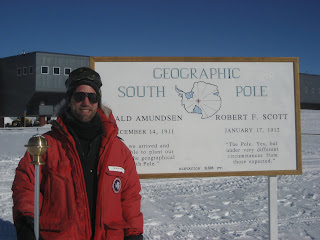 Me at the geographic pole. The world is spinning at my feet. I guess I’m spinning too, gotta watch out for dizziness! 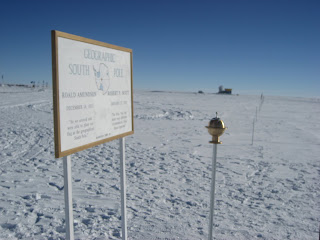 The geographic Pole marker, with our telescope far in the background.

The third picture is of me at the “ceremonial pole”, with the barbershop-looking pole and flags from a variety of nations. I think the ceremonial pole is only there for historical reasons; the real geographic pole used to be farther away from the dome, so a ceremonial pole was set up for “daytripper” photo opportunities, so they wouldn’t have to walk all the way from the plane to the real pole. Now, with the new station and the movement of the ice sheet on which we sit over the past few decades (at about 30feet per year), the ceremonial and “real” poles are only a couple hundred feet apart!

But who can argue with tradition? Not me, hence the two photos. 🙂 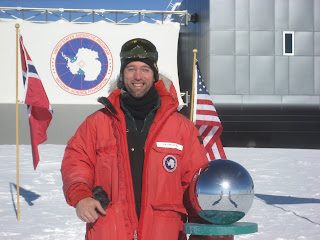 Me at the ceremonial pole.