It’s been a few day since I wrote here… largely due to two tales of woe.

First and foremost, my laptop is dying. The charger no longer charges it, the battery is almost empty, and after googling and talking to folks in IT here and talking to apple, there’s no way to fix it without giving it back to Apple to have them work on it. So, I’m laptopless for the next 2 weeks. I’ve taken over a linux workstation (with two big screens, so at least it’s an upgrade in that sense), and have figured out how to download pictures from my camera, but it’s not iphone compatible.

Having your laptop break brings home the fact that when you’re here, when something breaks you either have to fix it yourself, go without, or wait a looonnnnnng time for a replacement to come in.

Which brings us to the other tale of woe: the electronics that read out temperatures inside the big optics cryostat stopped working when we brought them down from the telescope to the control room so they’d be next to the cryostat, since that’s where we’re testing everything. The first indication was that the computer wasn’t getting any of the data it should; we quickly realized that the problem was probably with one of the timing signals sent from a “timing box” over some wires to the temperature-reading electronics box.

We have lots of custom-designed and built electronics here, to read out the signals from our detectors, temperatures of the cryostats, control the telescope, etc etc. Since we know those things can break and we’re a long way from Radio Shack, we stock a lot of extra components and parts here. A good part of making an experiment like ours work is in fixing all the problems that crop up; so this broken electronics box, while annoying, was just another hurdle to get over.

Ken Aird (another SPTer, from Chicago) and I spent a couple hours on Tuesday, then 5 more hours on Wednesday, tracing down the problem. We thought it was in the temperature-reading box, and pulled out a circuit board and replaced a tiny integrated circuit in there… but that didn’t change the behaviour at all. Looking at the signals more closely, we decided the signals coming from the timing box were a bit suspicious looking and decided to swap out the integrated circuit that sends those signals… and voir la, it worked!

Just in time for dinner, in fact. 🙂

So, down a laptop but having fixed the electronics yesterday, a new day begins. The camera cooldown is going well, and we should be able to start testing detectors on Sunday. 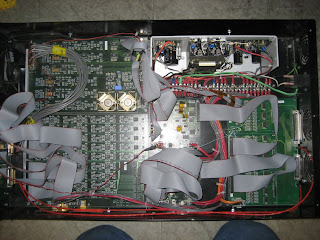 The optics temperature-readout box, which we thought was the source of our troubles… 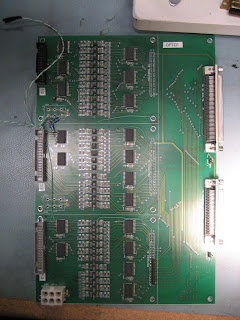 The board we pulled out of that box; Ken replaced one of the small 8 pin chips on there, using a soldering iron under a microscope to do so. 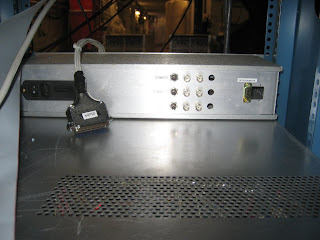 The actual source of our problems was an easy-to-replace chip in this, the timing box. Sometimes it takes a long day to find the easy solution.