Today – my first full day at the Pole – we went out to the telescope to start our work. We’re here to do some modifications to the camera that will help improve the pictures we take with it – more on that later. The camera (also known as the “receiver”, since that’s what we call radio-frequency detectors) is housed up in the telescope, and it takes a lot of work to get it down so we can work on it.

First, though, here’s a glory shot of me with the telescope in the background – the telescope is 30 feet in diameter, my head is much smaller – really! 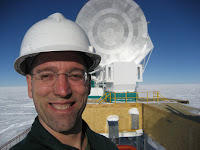 That’s what we did today; we moved the telescope so the “receiver cabin” was docked with the room of the control room that sits beneath the telescope, opened up some big doors between the ceiling of that room and the floor of the receiver cabin, and lowered the whole 2000 pound package from the telescope into that room.

Before we could do that, we had to unplug all the cables from the electronics that read out the camera – lots of cables, because there’s about 1000 channels of data coming from the receiver into the data system. We also had to disconnect all the hoses that cool the receiver and optics down to cryogenic (4K and below) temperatures. Then, we carefully lowered everything using some chain hoists – kind of like mini hand-operated cranes. Here’s a picture of two of the grad students (Liz from UC Berkeley at upper middle, Abby from U. Chicago on the right) working to unhook everything before we lowered it. 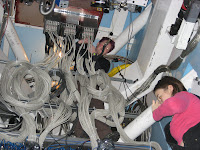 Also, here’s movie (a little bit shaky again -I’ve got to get a steadier hand!) from up inside the receiver cabin before we lowered the whole thing down to the ground.

Inside Receiver cabin before lowering